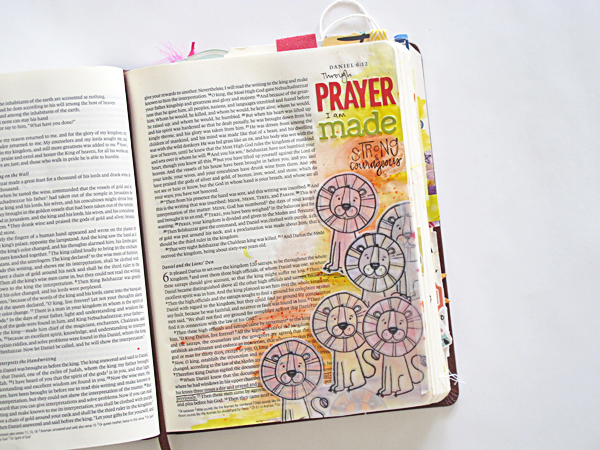 The book of Daniel is one of my favourites, and I’ve been reading through it again this month and journaling as I go. Story after story of the favour of God on his life despite his circumstances is more than encouraging – it’s inspirational. It’s so obvious that the source of his boldness, strength and courage came from a rich devotional life and time spent communing with God.

Probably the story we most associate with Daniel is the one about the lion’s den. If you grew up going to Sunday School then you’ll be familiar with it, but let me give you a run-down. Daniel was a prisoner of a foreign king, forced into a life of servitude. However, he kept gaining influence amongst his captors all whilst declaring God’s glory in a nation that worshipped pagan idols. It came to the point where he even gained the favour of the King himself. Some of the jealous officials devised a scheme that would see anyone praying to God punished, and the King signed off on it. Daniel understood it was better to submit to God rather than man and continued to pray in full view of the city despite the threat of death. You can guess how the rest of it goes right? Daniel was quickly captured and thrown into the lion’s den where everyone expected him to be torn to shreds and eaten! He spent an entire night in there praying and when morning came he was released unharmed. Good news for Daniel! But the wider impact of that event was that the King then issues a decree throughout the entire known universe that people should worship Daniel’s God – the God who delivers and rescues. One man’s uncompromising boldness became the channel through which God was glorified throughout the world. I have to admit, I skipped over journaling this story until I had the High and Lifted Up stamp set in my hands because I just knew I needed to get that lion onto my page here! And not just one but I stamped a whole pride of lions in order to represent the multiple ways in which we can sometimes be attacked. I stamped them on the bible page, and then I placed a sheet of vellum over the top and stamped them all again. I like to think these transparent lions represent the empty threat the enemy tries to scare us with. Meaning no matter what may come our way our ultimate eternal safety comes from knowing we belong to a God who delivers and rescues. My prayer then quickly becomes that I should be as strong and courageous as Daniel in times of persecution.

PS. I have a bonus video for you today! If you’re anything like me you’re starting to accumulate quite the collection of Illustrated Faith stamp sets right? Today I’m going to show you my quick and easy way of storing them all together so that I can simply pick them up and take them with me whenever I’m on the road. My system still gives you some leftover backing card so you can ‘do a Shanna’ and punch some tabs for your Bible! ;-) There are many other systems of stamp storage out there too, and I’d love to hear what you’re doing!